The 2022 Missoula Christmas Bird Count (CBC) will take place on Saturday, December 17, 2022. The Count is a circle with a 7.5-mile radius, centered at the intersection of Reserve St. and I-90. The area within the circle will be covered by small groups and individuals. These areas will be assigned ahead of Count Day. You can participate by joining a group in the field or by being a feeder watcher. If you would like to take part in the field Count, contact Larry Weeks at: bwsgenea@gmail.com, 406-549-5632 (phone), 406-540- 3064 (cell). Larry will provide different options for you to choose from. Also contact Larry if you want to be a feeder watcher. We also tally unusual birds not seen on Count Day that are seen during Count Week. Count Week includes the 3 days before and 3 days after Count Day.

The Count Day will end with a potluck dinner at the home of Larry Weeks, 2428 West Kent, which is near Rosauers. Potluck guests are welcome to arrive at 6:00 pm. Dinner will commence at 6:30 pm. Please bring your favorite potluck offering, or A-L, bring a salad or dessert, and M-Z, a hot dish. After the potluck, we will tabulate the results of the field Count. 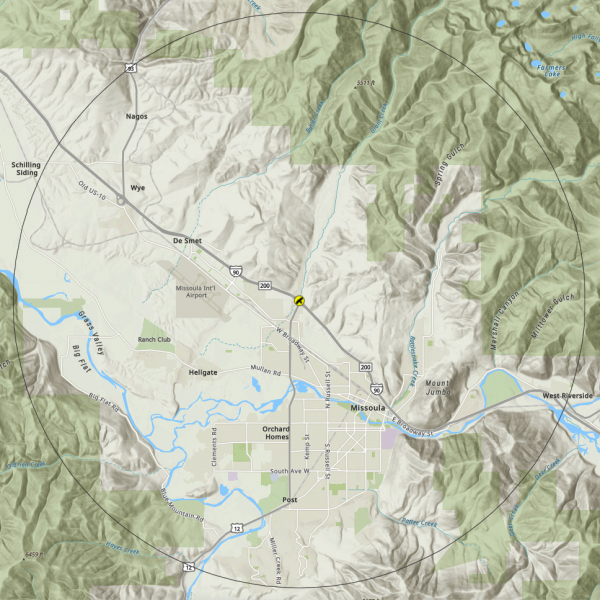 The Missoula Christmas Bird Count is conducted within a 15 mile diameter circle centered at the intersection of Reserve Street and I-90.

Up through the 19th century, many North Americans participated in the tradition of Christmas “side hunts”, in which they competed at how many birds they could kill, regardless of whether they had any use for the carcasses and of whether the birds were beneficial, beautiful, or rare. In December 1900, the U.S. ornithologist Frank Chapman, founder of Bird-Lore (which became Audubon magazine), proposed counting birds on Christmas instead of killing them.

That year, 27 observers took part in the first count in 25 places in the United States and Canada, 15 of them in the northeastern U.S. from Massachusetts to Philadelphia. Since then the counts have been held every winter, usually with increasing numbers of observers. For instance, the 101st count, in the winter of 2000–2001, involved 52,471 people in 1,823 places in 17 countries (but mostly in the U.S. and Canada). During the 113th count (winter 2012–2013), 71,531 people participated in 2,369 locations. The National Audubon Society now partners with Bird Studies Canada, the Gulf Coast Bird Observatory of Texas (responsible for CBCs in Mexico), and the Red Nacional de Observadores de Aves (RNOA, National Network of Bird Observers) and the Instituto Alexander von Humboldt of Colombia.